As an impressed customer of Firestone Audio I was really curious to get my hands on the Fubar IV Plus DAC/Headphone amp. Firestone Audio has a reputation of offering products that fall into the  “absolute value for the money”, yes – I know Audiophile products aren’t generally easy to afford but if you look around there are always “gems” at acceptable prices!

A full metal enclosure provides the Fubar IV Plus a rugged feel and solid look. Available in a choice of black or silver faceplate the unit is, as most of the other products from Firestone audio small and actually cute ;-). 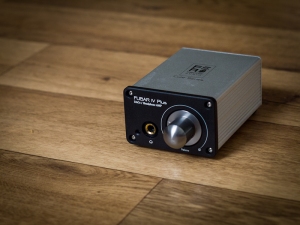 The Fubar IV Plus accepts USB and optical inputs. The USB is limited to 16bit/48Khz which is not really something expected out of a device at this price but since the DAC upsamples all input signals guess that wouldn’t be an issue, still I would love to have native 24bit/96Khz support. The optical and coaxial inputs support 24/96  content and the optical input is my preferred option from my Macbook Pro. 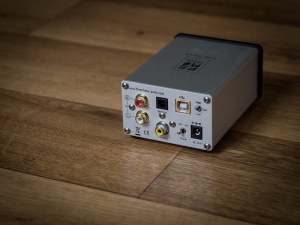 My previous Firestone Audio product was the Fubar II USB DAC which had really impressed me with the quality to price ratio and I started out with high hopes for the Fubar IV Plus and have not been disappointed :-). Let’s start out with the source material; most of my audio collection is standard 16/44 FLAC and I’ve only got a handful of 24/96 tracks so why the craze towards a DAC which supports higher sample rates? The Fubar IV Plus is not just a DAC that supports a higher sample rate but also provides it’s own Upsampling feature, meaning any source material fed into the Fubar VI Plus is upsampled to 24/192!

I started out with the Fubar IV Plus as a DAC powering my Matrix Mstage headphone amplifier. Let me start with the most obvious, the sound-stage on the Fubar IV Plus is the first thing that hit me once I plugged in my HD600/650! Coming from the Fubar II the obvious ridiculous improvement in sound-stage is just amazing!. Just this single feature kept me stuck with my headphones as I tried out some of the live performance tracks that I had, which felt ok on the Fubar 2 but airy and well….lively… on the Fubar 4 plus. The “air” in live performances is also quite perceivable with clear instrumental separation. Talking about clarity, the Fubar 4 Plus definitely provides a very clean and clear sound without much color (isn’t completely neutral, thankfully) but definitely adds slight warmth making the sound interesting and not dry. There is no noticeable sparkle in the highs but they are well spelled out keeping the sound engaging, mids are beautiful,  and lows strong making the Fubar 4 Plus a very pleasant DAC.

The upsampling capablity of the DAC has been a very interesting feature to have as most of my audio is not high-resolution or high quality recordings. All my audio CDs have been ripped to lossless at 16/44Khz and upsampling these to 24/192Khz definitely adds more definition to the audio. The promise of high quality audio content has come with offerings like HDtracks but a majority of music is bought to-date is from iTunes or Amazon Music and other such online music stores. It is quite impossible for someone looking for good audio to have his or her music library in high resolution and for now upsampling seems to be the solution. 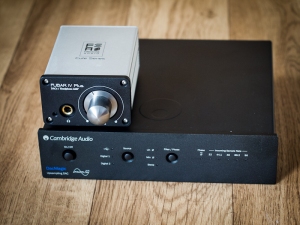 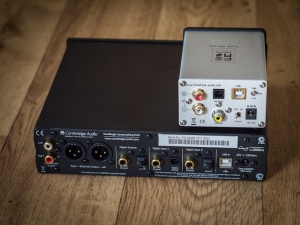 Ofcourse these are two different products, the DAC Magic wiith its plethora of connectivity is more of media center “ish” DAC and the Fubar 4 Plus a straight forward headphone listening unit. I can confidently say that the Fubar 4 Plus gives the DAC Magic a worthy fight and actually wins considering convenient desktop use. TIP!: On usb connections the Fubar 4 Plus achieved a recognizable performance boost by opting for a Furutech GT2 cable!

Most audio enthusiasts looking for the  Fubar 4 Plus are probably seeking a compact DAC/Amp headphone solution, so let me talk about that as well. Actually, I did not notice much of a change when switching out my Matrix Mstage to opt for the Fubar 4 Plus’s built-in amplifier. The unit is capable of handling high impedance headphones (like the HD600/650) without any trouble, I listened to tracks with the volume pot at around the 9 to 10 o’clock position with the impedance selector switch behind on High. I also played around with my Sennheiser HD448 and Superlux 668B in the low impedance mode and everything was as good as ever! The amplifier section (comes with the LM4562 opamp) allows for opamp rolling opening up a bunch of possibilities to further tailor the sound.

On the whole I would rate the Fubar IV Plus as a neutral toned gear (comparatively the Fubar II now seems to be slightly warm!), the lows are good, treble  clear with  slight shine and the mids seem to be very slightly recessed though that could just be me! (or my HD650). Remember I have paired the Fubar IV Plus with the Matrix M-stage V2, the Matrix in itself is a fabulously neutral headphone amp and together with the 4 Plus it does seems to take a slightly cold or more neutral character.

A DAC/Amp combo is a great way of saving money (and space) for the budding audiophile. The Fubar IV plus is a worthy DAC/Amp combo to own atleast until you save enough to upgrade to next price bracket, Firestone Audio has a clear competent product in this price range and is a worthy purchase for audio enthusiasts.